On the Value of Zombie Walk

Culture Jamming with a Meaningless Mob instead of a Pointless Protest 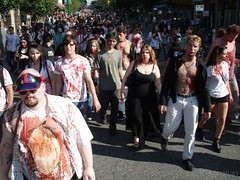 Ask the average zombie, "why?" and the answer will be something along the lines of "for fun." Thousands of people will spend hours preparing and then give over more hours to the walking/shambling for apparently "no reason" and the this absolutely baffles the uninvolved. But there is an underlying, deeper, unspoken reality to events like Zombie Walk.

It is a wonderfully subversive absurdist spectacle. People caught unaware and ask what it is for are stunned by the superficial lack of meaning. They expect people taking to the streets in such numbers to have some reason for it. The Critical Mass rides, the Olympic protests, the G20 protests, all of these people are comfortable with because that sort of activism is expected and understood. But confronted with a flash mob of the shuffling undead, they have to start asking themselves questions, even if only for a moment. 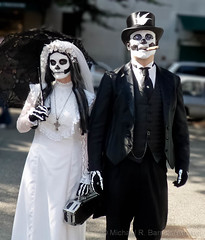 A few thousand people out of a Saturday afternoon collectively not doing the ordinary and expected, disrupting traffic, taking over a couple major streets, and confusing tourists and commonplace consumers is a very powerful thing.

Part of the appeal, I am sure, for many Zombie Walkers is there is a thrill in taking over a busy downtown street and co-opting it for a free-form collective street theatre. Unlike the expected form of protest in Vancouver and elsewhere, police presence is minimal, and - probably a manifestation of the confusion over the start time and the disorganized decentralized "organization" that is a fundamental reality of a flash mob - there was almost none at all this year.

Contrast this with the massive police presence at the recent G20 protests in Toronto or the Olympic protests earlier this year here in Vancouver. In both cases earnest protesters with serious and noteworthy agendas were forceably shut down and the presence of violent protesters led to the discrediting of all the voices of protest. With the media's repetitive focus on the violent minority all messages and meaning were lost and the excuse was presented to remove everyone else to prevent any further dialogue. In this way protest is reduced to something majority people are more prone to ridicule than get behind and the attempt to be heard ends up in nothing but backfire. 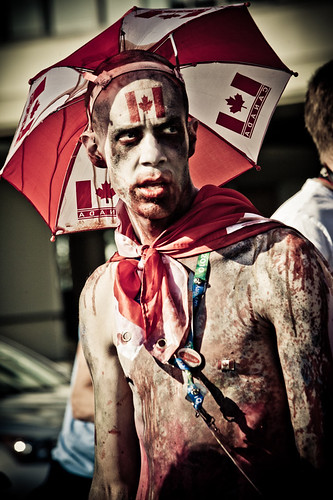 380934-6 by halfgeek, on Flickr. Some rights reserved.
Conversely the agendaless Zombie Walk "succeeded" in ways the earnest protests can no longer hope to. Vancouver's main shopping and tourist street was completely shut down. Vancouver's consumers and tourists where presented with a very telling mirror in the shuffling, decaying horde moaning for "brains." This critical agenda could be seen many of the walkers' costumes. The zombie hausfaus, the zombie businessmen, and my personal favourite, a zombie Olympic tourist. But for each individual with something to say there were plenty more wearing simple costumes with no apparent agenda, helping to make the Zombie Walk impossible to discredit in the fashion "hippie protesters" and "black bloc anarchists" can be dismissed. The zombie walkers are comedy, theatre, parody and superficially without agenda that can be subjected to ridicule. The mainstream media is unable to fault and devalue what is perceived as a non-existent agenda.

People come and participate because it is fun. It is not a "broccoli" event attended out of a sense of necessity and duty, but it is not fluffy cupcakes either. The Zombie Walk is meat and brains.